Farmers are invited to sign up to the AgriCarbon Programme before the 30th of September 2021 to maximise their carbon credit income for accumulating carbon in their soil over the past 5 years and receive their first payment as soon as 2022.

For most farmers, transitioning to regenerative agriculture has been driven by increasing input costs, declining soil quality, and in response to battling drought conditions. Now at long last there are also direct financial benefits available to regenerative farmers in the form of carbon credit revenue.

“Any farmer that is currently, or planning to, carry out regenerative practises on their farm and is able to submit soil data to us every year, can participate in the AgriCarbon Programme” says Nyasha Shumbayarerwa, Agriculture Project Coordinator at Climate Neutral Group.

Gray Maguire, Project Manager at CNG confirms: “The priority right now is to enrol regenerative famers with existing soil data to make sure that these early adopters get to maximise their benefit for being pioneers in the sector. We are excited that there has been strong interest in our Programme with the first farmers already signing up”.

The AgriCarbon Programme, run by Climate Neutral Group, works by providing famers with an additional source of income by helping them certify and sell highly sought-after agricultural carbon credits. CNG determines the amount of carbon credits generated on the farm via the soil data received, which is then submitted to the carbon auditor and finally the Verra carbon standard. Including multiple farms under the AgriCarbon Programme substantially reduces carbon development and auditing costs per farm, thereby maximising income to the farmers. By joining the Programme farmers avoid the complexity and high-cost barriers of certifying carbon credits themselves, so they can focus on the health of their soil and business.

Franz Rentel, Country Director of CNG South Africa says “Companies in South Africa and across the world are committing to net- zero carbon emissions and are searching for carbon credits of the highest quality. They’re turning to agriculture to purchase credits that support farmers in transitioning toward farming practises that remove carbon from the atmosphere and enrich the soil. Climate Neutral Group, together with its partners, has the support, technology and finance that enable farmers to generate high quality carbon credits that companies want to buy”. 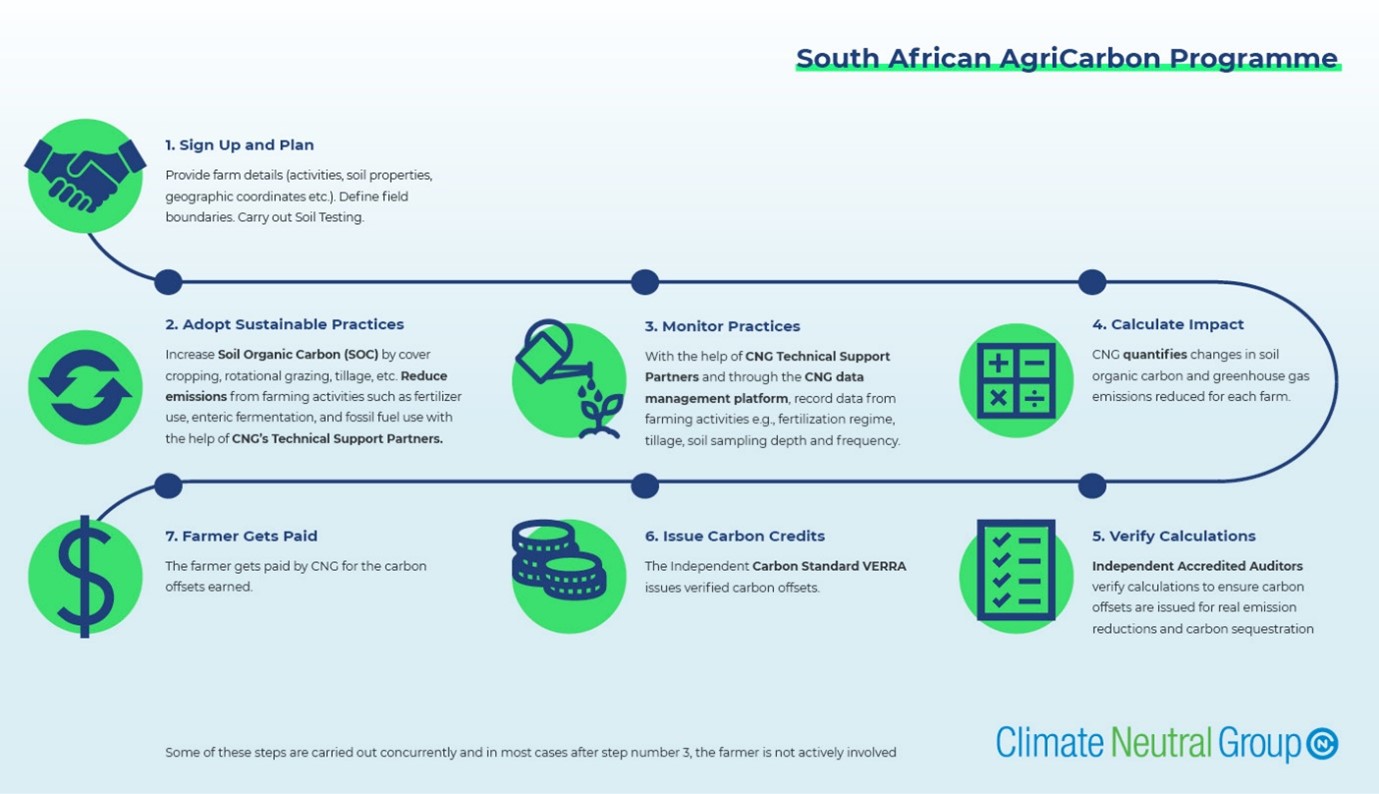 Climate Neutral Group (CNG) is dedicated to combat climate change and supports companies on their journey to net zero emissions by 2050 in line with the Paris Agreement. Our team of experts passionately support over 3.000 companies globally in making real climate impact and, as a result, have offset over 10 million tonnes of CO₂ and improved quality of life for millions of people around the world.CNG was founded in 2002 by Triodos Bank and DOEN Participations and has since then rapidly expanded. Today, CNG is active globally via offices in The Netherlands, Belgium, and South Africa. CNG is a founding partner and member of The International Carbon Reduction and Offset Alliance (ICROA) since 2008, B-Corp Certified since 2015, ISEAL subscriber since 2019.