As the US pulls out of the Paris Accord, other countries charge ahead towards a clean energy future.

A little over a year ago, 195 countries signed on to the historic Paris Climate Accord to limit global warming pollution. This year, the United States pointed a loaded gun at its own foot, and President Trump pulled the trigger, announcing he will withdraw from the agreement. But the rest of the world is moving ahead with carbon pricing programs that will give other countries a head start in the race to a clean energy economy. Notably, The United States’ neighbors to the north and south are adopting national carbon pricing programs in 2018, and the European Union and China are allying to become global leaders in the transition to a low-carbon economy. 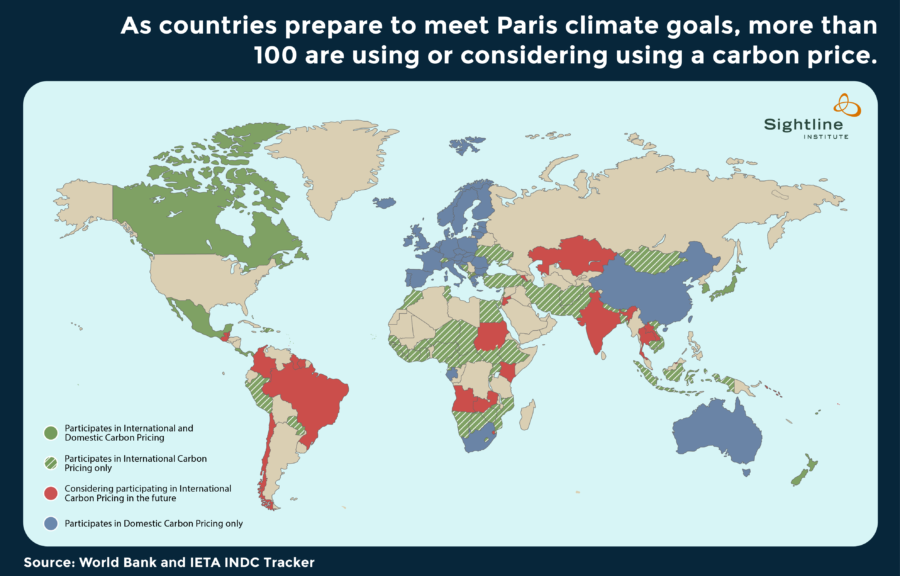 Original Sightline Institute graphic, available under our free use policy.

North Americans are warming to dividends

The carbon prices already in place were worth about $50 billion in 2016, and international action coordinated by the Paris Accord could generate a new stream of revenue in participating nations in future years. Nations and states use the revenue to reduce other taxes, fund clean energy projects,and fill budget holes. And some jurisdictions give some revenue back to the people. The idea of carbon dividends, making polluters pay, and then writing people a check (similar to what Alaska does with taxes on oil production) is gaining ground in North America.interesting?

Author and entrepreneur Peter Barnes has long advocated for the idea that we all have an ownership share in common assets. More than a decade ago, he asked, “who owns the sky?”More recently, he asked, if Thomas Piketty is right that those who make money by owning things keep making more while those who make money by working keep making relatively less, how can we sustain our middle class, our democracy, and our planet? His answer to both questions is: we all have a share in the world’s natural resources, and, like shareholders, we all should receive dividend checks.

Canadians like the idea: Alberta’s carbon tax includes a small rebate, and the federal plan will send some money back to individuals. For nearly a decade, British Columbia has used carbon tax revenue to give money back to people in the form of income tax credit—not as transparent as dividend checks, but a similar idea. Now, BC plans to increase and expand its tax and use the new revenue to deliver rebate checks to ensure a majority of British Columbians are better off financially.

In the United States, California’s cap-and-trade program has always included a dividend in the form of a “climate credit” on everyone’s utility bill. But dividends are the heart of the new roposal for a revolutionary upgrade to California’s program. Between 50 and 90 percent of carbon revenue would go right back to individuals, so everyone in the state would get a check in the mail every quarter. Even if oil corporations ginned up fear that the carbon price was getting too high, everyday people would cheer because their checks would get bigger.

Many working on the California bill see dividends as critical to the bill’s success. California requires a two-thirds majority to pass new taxes, and Chevron sponsored an under-the-radar campaign to pass Prop. 26 in 2010, changing the definition of “tax” to ensure it applies to cap-and-trade too. As a result, California climate advocates must attract some conservative support for the new bill.

Californians’ hope that a carbon dividend might bridge the partisan divide that has stymied progress in the United States may be well-founded. After all, a few months ago, a group of prominent Republicans released the Conservative Case for Carbon Dividends, complete with a TED Talk and meetings with White House officials.

Advocates in Washington DC are also pushing a carbon fee and rebate.

The US hangs back, but the world moves forward

Countries and regions continue to march forward with carbon pricing. China, after years of experience with nine regional carbon pricing programs, is almost ready to institute a national program. Canada and Mexico are also set to roll out national programs. Meanwhile, the United States the United States lags. But California’s trailblazing climate efforts, and some conservative thought leadership on dividends, is laying promising groundwork for US action.

South African business and industries are taking steps towards mitigating the impacts of the proposed carbon tax legislation on their operations and investments. Climate neutral group has services such as the Carbon TaxScan, which helps businesses to measure and understand the amount of carbon tax the business is due to pay. You can reduce your business’ carbon tax liability even further by purchasing carbon tax offsets from our eligible South African offset projects.