What it means for your company

The National Pollution Prevention Plans Regulations, 2017 (‘The Regulations’) was designed for companies that fall into one of the categories mentioned in Annexure A of the Regulations. Should your company fall into one of these categories, you will need to submit a Pollution Prevention Plan (PPP) to the Minister of the Department of Environment, Forestry and Fisheries (DEFF) by 31 May 2021. Since the initial PPP covered the period from 21 July 2017 to 31 December 2020, which has now passed, a new PPP will need to be developed and submitted for the period between 1 January 2021 and 31 December 2025. The following is a list of requirements which will make up your company’s PPP:

Furthermore, an annual progress report must be submitted to the Minister by 31 March for each preceding year to track the progress that your company is making towards its mitigation plan detailed above.

Failure to comply with any of the above may result in penalties in the form of fines and imprisonment. These penalties will vary, depending on the severity of your company’s non-compliance.

A carbon budget is an amount of GHG emissions permitted, against which direct emissions arising from the operations of a company during a defined period will be accounted for.

Categories of companies that need to develop their PPP

The new Climate Change Act, which is currently under development, will inform a variety of regulations with the aim to reduce South Africa’s national carbon footprint. Once this Act comes into effect, further regulations for carbon budgets and mitigation plans will be published. Collectively, these two regulations are currently known as the National Pollution Prevention Plan Regulations mentioned above.

The carbon budget regulations methodology is in the final stages of development and will be finalised by 31 March 2021. This methodology is currently only voluntary but will become mandatory on 1 January 2023 and once the Climate Change Act comes into effect, the carbon budget regulations will be linked to the mitigation plans (still to be developed).

The DEFF wants companies to use the period between 1 January 2021 and 31 December 2022 as a pilot phase that links the carbon budget and mitigation plans. They want to do this so that when it becomes mandatory on 1 January 2023, companies will have already been using the system in the pilot phase and there would be no need for a ‘transitional’ phase.

The added benefit for taking part in this pilot phase is that your company will qualify for the additional carbon budget allowance (5%) with respect to your company’s carbon tax liability. 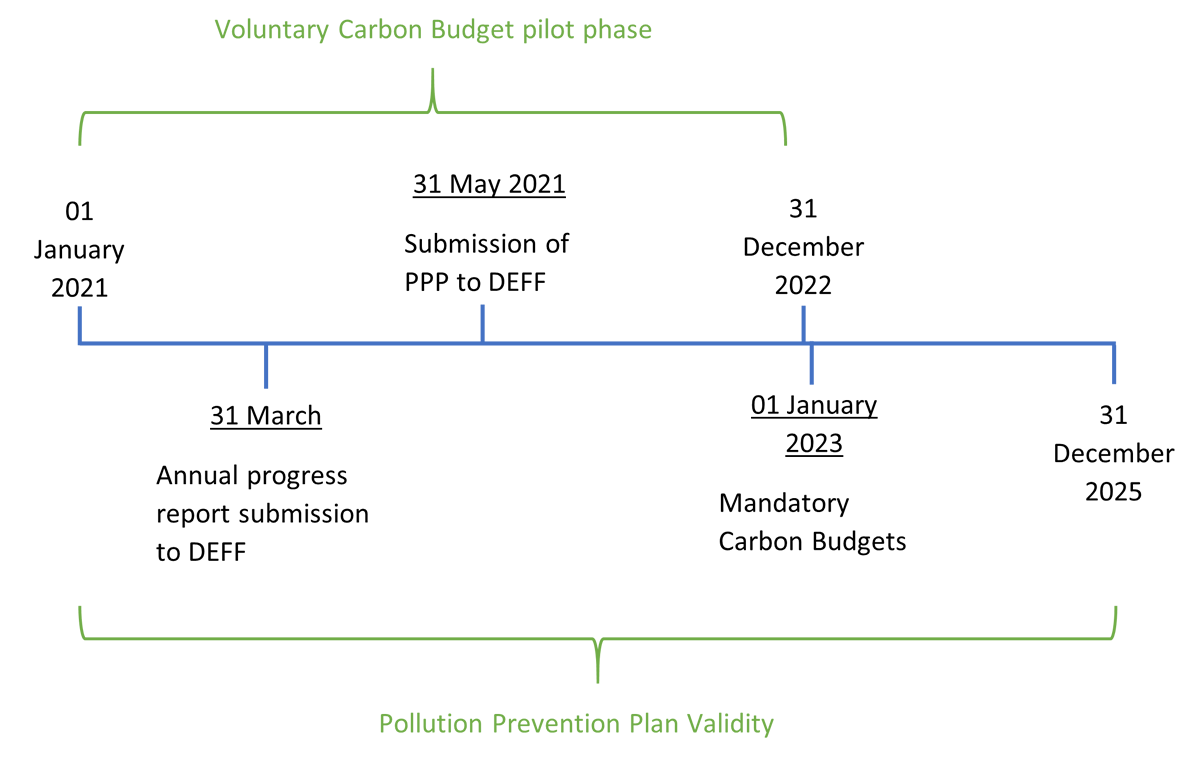 Climate Neutral Group can assist your company with the development of site-specific pollution prevention plans in preparation for the upcoming submission deadline. We will assist in the identification of all the monitoring and record keeping requirements as well as submissions of annual progress reports as stipulated in the Regulations.